Recently the prospect of a new train station in Ann Arbor has supplanted the library lot has the most talked about and controversial local civic issue. With public comments on the Environmental Assessment Report due today, November 2nd, it’s time to weigh in. 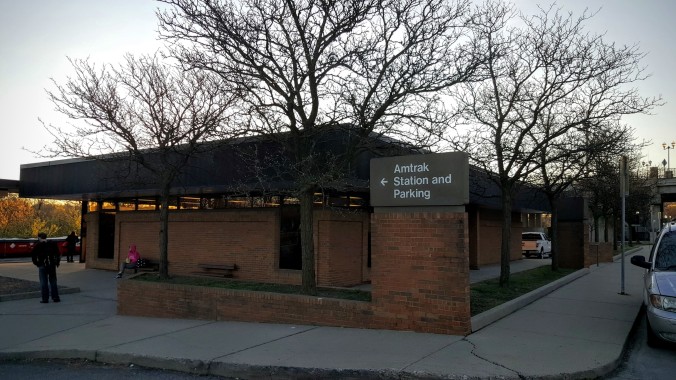 The report mentioned above was released by the city and Federal Railroad Administration back in in September stating the preffered alternative is to build a new train station and adjacent parking deck on a parking lot in Fuller Park. The history of a new station in Ann Arbor is exhaustive and has been covered impeccably by Ryan Stanton of the Ann Arbor News as well as by fellow blogger Vivienne Armentrout at Local in Ann Arbor (who may be the most informed person in town on this issue).  There’s also a great take by Doug Kelbaugh, Dean Emeritus at the Taubman College of Architecture & Urban Planning over at All Aboard on Depot Street.

Given the depth of information available on the subject, I will attempt to just briefly summarize the situation to date.  The vision for expanded rail and a new station in Ann Arbor goes back a long way, notably to John Hieftje’s Mayor’s Model for Mobility in 2006 that was partly the basis for the City of Ann Arbor’s Transportation Plan, adopted in 2009. This laid out a plan for a new intermodal station on Fuller Road to serve Amtrak and commuter rail to Detroit with a link to a seperate proposed light rail route, what later became the Ann Arbor Connector. The University is obviously a major stakeholder and it was suggested that the project be combined with additional parking for UM, predominantly health system students and staff. In the interest of brevity (highly recommend Vivienne’s article linked above for the full tale), the plan fell through, the university built a new parking deck on Wall Street, commuter rail as part of the RTA Master Plan failed at the ballot box in 2016 and the Connector is in limbo due to the enormous cost. So here we are trying to decide what to do with a decrepit existing Amtrak station with more questions than answers. On to my take.

I have something of a unique viewpoint on the train station in that I take Amtrak all the time. Like all the time. I took the train from Ann Arbor nearly 50 times in 2016, I’m taking it today. I even started a spreadsheet this year keeping track of my trips and times so that I had good anecdotal data for posts like this (average delay of 15:37 in 2017 thus far). It’s an imperative link for my job and provides connectivity and productivity that cannot be replicated with other forms of transit at this time.

That said, do we need a new station? Probably? The current one is small and seriously dated, not ADA compliant and the parking is a joke. There are plans to add service that should continue to increase ridership and Ann Arbor’s station is both the worst station on the line and the busiest. Should it be built in Fuller Park as a massive parking deck with sidecar station for a cost approaching $100 million?  Definitely not.

The only real positives of Fuller Park over another site is the proximity to the hospital and potential connectivity to the Connector. The argument has been made that the hospital location is important for commuter rail which I find dubious. The line may never happen (I’ve harped on the foolishness of a line that connects A2 to New Center) and let’s remember this line is geared towards Ann Arbor area residents traveling to Detroit, much less so the other way around (there may be 10,000+ employees at the health system, there’s 20+ times that in the greater downtown Detroit area).  A platform could be built on Fuller Park if needed in the future. The Connector, ahem, connection, would be great but the prospect of that project is dim given the astronomical cost. Betting on that line seeing the light of day is a low odds gamble. 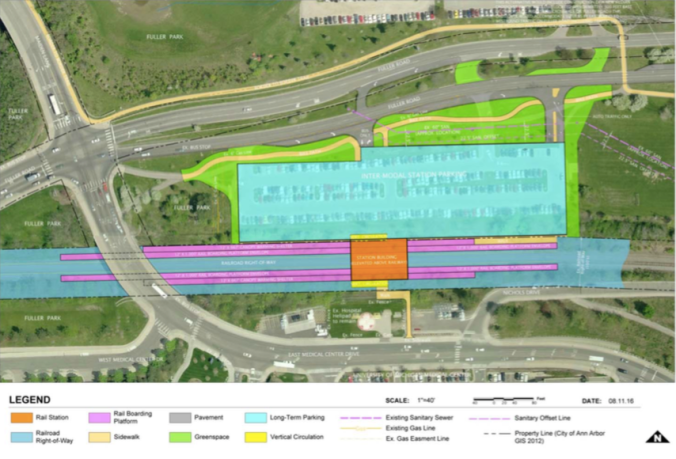 On the negative side, Fuller Park is, in fact, a park. While currently used for UM parking, it could and should be a public use riverfront park, not a massive parking structure. Also, while close to the hospital, it’s not close to anything else. There are no Transit Oriented Development opportunities, no neighborhoods nearby, no proximity to downtown.

The existing location on Depot Street has always been a train station, is near downtown and Lowertown, is on a major transit corridor via Broadway/Plymouth Road and offers some unique attributes with the DTE site next door. In short, if a new station should be built, it should go there.

The report gives a number of economic reasons for Fuller Park, a large one hinges on the expanding of the Broadway bridges (unnecessary in the short term) and the acquisition of DTE and Amtrak-owned land (estimated at $6.7M-$12M). How much should it cost to acquire Amtrak land for a new Amtrak station? I think a fair number is $0 but whatever it is, it’s low. What the report fails to take into account is that acquisition of environmentally contaminated land from DTE should also be cheap, in fact the opportunity to partner with DTE on the parking aspect of a future project on that land could very well be a net positive. While the new station needs more parking than it has now (often over capacity in my experience, the current lot is a muddy free for all), it does not need nearly 1,000 spaces unless a million transit positive things happen over the next 25 years. Parking in the short term could be tucked below Broadway and shared with a DTE project. Additionally, there are great opportunities for development and neighborhood connectivity with a transit hub. Fuller offers none of that.

We have a great opportunity here to build a new transit hub for Ann Arbor, a gateway to our town. Expanded train service with all new trains (currently on order) should result in increased ridership (side note: actual ridership projected to increase 19% this year from a construction addled 2016, up 45% over the past 20 years but just 0.5% over the past 10, true increases will require more scheduled runs, better service or higher gas prices). Building a massive parking deck in Fuller Park seems a move geared towards UM parking, takes over an existing park and offers no unique opportunities other than a link to a long shot Connector project.

Depot Street offers the chance to build in a historic location near downtown, create synergies on the DTE site and Lowertown and still connect to strong transit links via Broadway. Properly executed and phased, the project could start at less than half of current cost estimates and grow as needed with ridership and commuter rail links. Our transit future is uncertain with autonomous vehicles on the horizon so investments made now need to be incredibly prudent. Modest, phased construction at the current location is the best path forward.

6 thoughts on “A New Ann Arbor Train Station: Time to Weigh In”