A lot has been made of high rental rates here in Ann Arbor, I even undertook a review of the state of the student housing rental market just last month (spoiler alert: the rent, occupancy and rate growth is bananas). However, this issue is not unique to our town, rents are skyrocketing virtually everywhere. Being the data junkie that I am (and having access to this sort of data at my day job), I wanted to take a look at how the Ann Arbor MSA stacks up to other markets in terms of rental rates and growth. I pulled information on 65 different Midwest markets and for good measure, I also looked at population growth, unemployment rates and inventory changes from 2012 to 2017. I last took a statistics class my sophomore year of high school so I’m certainly missing some significant conclusions but I’ll offer up a few observations that stand out to me.

As it relates to Ann Arbor specifically, our community posted the sixth highest rental rate at an average of $909 per unit, Chicago is first at $1,046. A2 is tied for the third lowest vacancy rate at just 3% trailing Appleton, WI and Jackson, MI(!). The five year rent growth of 20.13% is fourth, firmly planted in with the bigger metros of Kansas City, Columbus, Grand Rapids, Chicago and Minneapolis. This seems to be driven in part by a supply side gain of just 2.82%, only two other markets with any type of population growth, Kalamazoo and Elkhart, added less. For those that think Ann Arbor is going through a revolutionary development boom, we’re actually doing less than most of our neighbors.

Oakcliff Apartments, 217 units added to the supply side in Ann Arbor in 2015.

In general, college towns are growing, factory towns are not. No shock there. Of the top 10 growth metros, 8 have a major university. The areas bleeding population include Flint and Saginaw here in Michigan, Youngstown, OH and Rockford, IL.

The Great Plains are the place to be. Markets in Iowa, Minnesota and Nebraska seem to be fairing extremely well. Strong population growth, extremely low unemployment and impressive rent growth.

Supply side growth, or lack thereof, is an obvious major factor in rent growth. Certain markets with no new inventory like Elkhart, Jackson or Muskegon actually saw strong rent growth despite lack of population growth and lagging employment. There is a somewhat strong correlation (see Dr. Elzinga, paid a little attention in stats) between supply growth and rent growth although not between supply growth per capita and rent growth. I suspect that a sizable percentage of rent growth is inorganic in that it’s coming from high new construction rents rather than rising existing rents. Certainly rents are going up in existing buildings as well but markets with a lot of new construction skew the numbers upward.

All in all some thought provoking data. Interested to hear other’s conclusions.

Just before Thanksgiving, plans were submitted to the city requesting a rezoning of a full city block at the northwest corner of Hoover & Greene in the shadow of Michigan Stadium for a 170-unit mixed-use development. 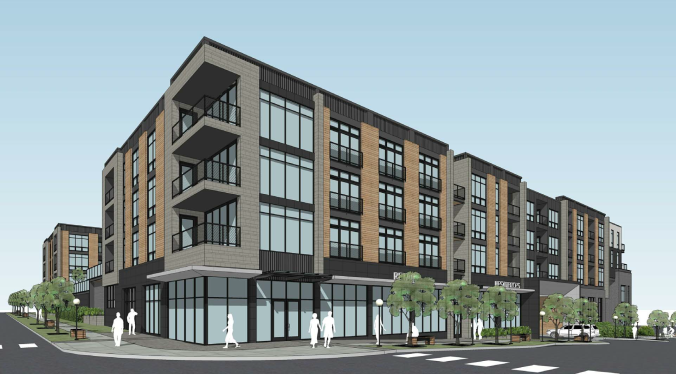 Proposed by Southfield-based REDICO and designed by Myefski Architects (known for the proposed Library Lot development and the under construction Hub project on Huron), this development is slated to include 170 units with 180 total bedrooms, predominantly studio and one bedroom apartments. The building will have a corner pocket park and 3,350 square feet of retail, a nice bonus in this neighborhood, essentially replacing the small commercial building there now. Parking will be provided in a two story garage below the building and includes more than one space per unit, even more than one space per bedroom given the small floorplans. It’s more parking than is needed by zoning and probably more than is even needed by market demand so the MLive commenters that come out of the woodwork to beat the parking dead horse will have to stick to articles about the Lowertown development.

The block is home to predominantly rental homes and is presently zoned half C2B and half R4C. REDICO is petitioning the city to rezone the entire block bound by Hoover, Greene, Davis and Brown to C2B to accommodate the proposed project. This seems like a great in-fill site with a unit mix that can cater to a mix of students, graduate students and young professionals.  Plus a little neighborhood retail! We’ve noted recently on this blog about the ridiculously high occupancy and rents of properties near campus, studios are now renting for north of $1,400 and have gone up nearly 12% in just the last 2 years.  Hopefully this one sails through the process, seems like an excellent redevelopment project and the need is obviously there.