I’ve been hesitant to touch this one but with the recent news that a proposal could head to the ballot in November, it’s time to weigh in.  The library lot, most specifically the proposed development on top of it, is probably the most controversial item on the city’s agenda in 2016 not associated with shooting Bambi’s relatives. 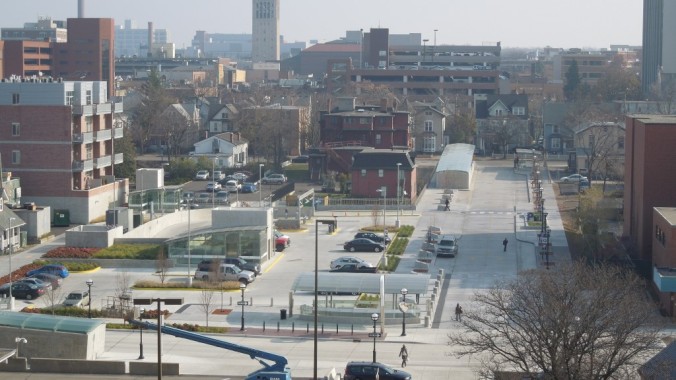 To quickly bring you up to speed, the so-called library lot is the parcel immediately to the north of the downtown Ann Arbor District Library on 5th between William and Liberty.  All the way back in 1991, the area was studied for a public park with mixed use development behind it.  The space was still a surface parking lot when the 2006 Calthorpe Report came out and furthered the same notion, now with an underground parking garage with a “town square” and residential development above.  The city actually followed through on the first part of this plan and began construction of the Library Lane Parking Garage in 2009, opening to the public in 2012.  The garage goes 4 stories underground, contains 711 spaces and was built to potentially accommodate a future building above.  During construction the city issued a Request for Proposals (“RFP”) for development of said building.  Six proposals were submitted and the one to that rose to the top was a 15-story hotel and conference center presented by Valiant Partners out of New York.  The public park space was strangely absent and the proposal was eventually shot down, mainly due to the fact that the city was financially on the hook for the conference center component but also stemming from a variety of political factors.

That brings us to present day(ish), where the city has one again issued an RFP on the library lot.  The city hired CBRE to market the site (for an exorbidant fee I might add, I work in this space, that’s highway robbery) and initially received 9 proposals.  This time around, projects were required to include 12,000 square feet of public space for a park or plaza.  All proposals included a hotel and/or residential component ranging from 8 to 18 stories and some public space although oddly most did not include the full 12,000 square feet.  These initial proposals were hewn down to 5 and then to 2 finalists in December 2015 before finally the project from Chicago-based Core Spaces was chosen as the preferred alternative in January 2016. 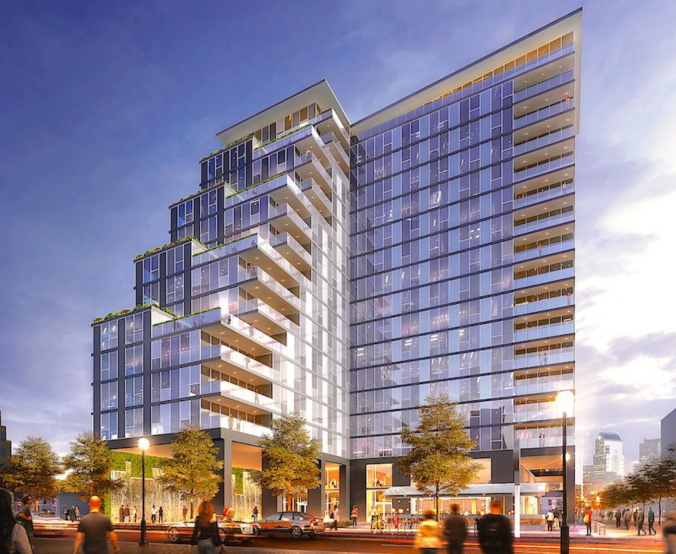 The city is currently negotiating the sale and soliciting public input so the project continues to evolve but here’s the basic overview.  Dubbed The Collective on 5th, the project is a 17 story, 180 foot tall, 352,496 square foot building with 360 apartments, 131 hotel rooms, 3,353 square feet of retail/restaurant space, and 20,198 square feet of office space with a 12,000 public plaza out front.

Final approval of the sale and site plan is no foregone conclusion, sale of public land requires 8 city council member votes and only 7 voted to even begin negotiations of a sale. Additionally, a group of active citizens, the Library Green Conservancy, has been collecting petitions to bring the measure to a city-wide ballot in November.  I generally feel we elect council members to do this work for us and make decisions based on the best information at hand while representing the needs of their consitituents.  However, if there’s any chance of this going to general election, the populace needs to be educated on the facts (hence, you know, this blog).

The petitioners, led publicly by Alan Haber (and bless their hearts and their conviction, I disagree with them but this is democracy at its best), present a very simple alternative to potential signers: Do you want a downtown central park or another tall, ugly building?  If you frequent the downtown YMCA, the Farmers Market or any of a number of other downtown area haunts you’ve likely seen them or been approached, as I have, several times.  Faced with that basic choice, the signing residents, which skew to a grayer demographic, somewhat obviously prefer a park.  What I’m attempting to do here is present the actual data points I think one needs to make a decision on a proposal such as this.  Like the petitioners, I won’t try to hide my own bias but I will show the whole picture as best I can.

The root of the issue for me comes down to the public space and economics.  The library lot isn’t that big, it has a parking garage below it and assorted ramps, elevators and stairwells.  It can support a fairly small park that’s really more of a plaza as it’s not built to accommodate large trees or heavy sod and plantings.  I’ve advocated for a downtown park in the past, we could use a public commons space in Ann Arbor, but if you’re thinking of this as a central park with all the amenities we need, I’m sorry to disappoint.  This is more of an urban plaza, a little larger than Liberty Plaza around the corner which is just over 10,000 square feet.  As such, with the Core Proposal you get up to $15 million dollars in a one time payment and up to $3 million per year in property taxes plus a 12,000 square foot park/plaza!  The alternative is no money to the city and a 16,600 square foot park/plaza!  Money certainly isn’t everything but those economics are tough to ignore.  Think about our school, infrastructure and affordable housing needs. 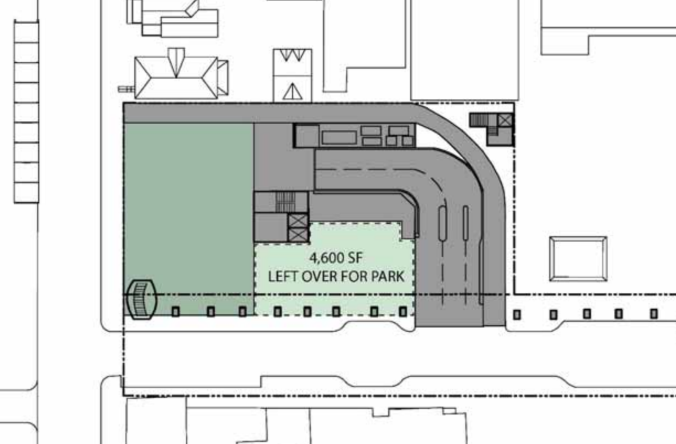 Now if you have nostalgia for a bygone time and simply can’t stand tall buildings in Ann Arbor, I know where you’ll stand.  I get it, it’s a big building.  It does, however, conform with zoning height limits making it comparable to newer buildings and still well below infamous towers like Tower Plaza or University Towers.  There’s actually more than a dozen buildings within a few blocks of here with 10 or more stories so it’s not as out of context as some would argue.  It will also bring a beehive of activity to the heart of town, activating the park, providing permanent jobs and hundreds of patrons for local businesses throughout the downtown area.

I truly think this project is a fair compromise in regards to the park and the economics are eye popping.  It’s important to remember that growing outward with sprawl is inefficient and more expensive long term and that we are restricted in that sense through our Greenbelt program.  Thus, we have to increase density and grow within the city limits, namely in appropriate transit corridors and in the downtown core.  If you’re simply anti-growth period, consider that Michigan state law limits property tax increases and that government expenses outstrip tax revenue without new development.  Without new development we will almost certainly have to payer higher taxes or cut services.  Of course, that doesn’t mean it has to be this development but we can’t stay static, you either get busy living or get busy dying.  This is smart growth with multiple uses in the heart of downtown across from Blake Transit Center that also provides a public amenity.  No development is perfect but this one checks a lot of boxes.  It should receive a little more tweaking by planning, council and the public through this process but ultimately this should be a project that deserves to move forward.

The idea of a park in downtown Ann Arbor has been around a long time but has come to a head recently with the ongoing discussions of selling the so-called Library Lot to a private developer for a mixed-use project.  Proponents of keeping the land for a park are even calling for a public vote in the fall.

For a variety of reasons, I don’t think the Library Lot should be a park.  It’s essentially mid-block, it’s not large enough to be the significant central park it should be and the parking structure underneath prohibits large growth vegetation.  Furthermore, the parking garage was built to house a building on top and it’s an ideal location for the dense project that’s been proposed by Core Spaces.  Backing away from it now would be a disaster and cost the city the $10 million it will receive for the land plus millions more in tax dollars for years to come.  Taking the decision out of city council’s hands is also a little ridiculous, we elect these officials to make city decisions, let’s let them do their jobs.  (More info on the planned project can be found here.)

However, I’m all for a downtown, central park.  I just think the Library Lot is the wrong location.  The right location is directly across the street.  I’m talking about the Federal Building.  This building, arguably one of the ugliest in Ann Arbor, is an awful use of one of the most prominent sites in the city.  Even more criminal is some of the beautiful buildings that were torn down to make way for it including the beautiful Masonic Temple.

The Federal Building was built in 1977, a closed off, low slung building with a large parking lot in the rear.  Essentially, a travesty of urban architecture during a time period that saw altogether too much of that. 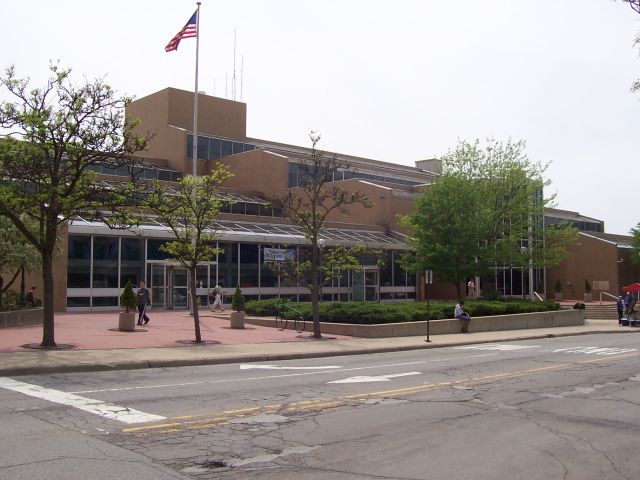 The site it sites on is much larger than the Library Lot and would have access to Liberty, Fourth and Fifth.  The rear of the site could be sold to the AAATA to expand the Blake Transit Center with a desperately needed additional bus lane and perhaps more indoor waiting area space.  This would essentially be a western extension of Library Lane and would help take buses off Fourth.  The remainder of the site could be used for the park.

The benefits are obvious, an expansion of the transit center, green space to counter two larger nearby developments and filling the need of a downtown meeting place that the community needs.  The big and even more obvious problem is what to do with the existing Federal Building.  I would suggest building a new, more functional urban building in one of a few locations.

In my opinion the best location would be the the site just two blocks north of here, the southeast corner of Fifth and Huron.  That property is owned by First Martin and has been held for an office development for a long time.  It’s directly across the street from City Hall and the Courthouse.  It’s also a location where modern architecture would not be too out of place if a new building went that direction.  Another good option would be the County-owned site at the southwest corner of Main and Ann.  That location is across the street from the Washtenaw County Courthouse and has direct access to the Ashley and Ann Parking Garage (which can be expanded to house an additional 375 cars if necessary).

Is this all a pipe dream?  Perhaps but it could be done and the results would be outstanding.  I would say the citizens of Ann Arbor that want a downtown park should consider using their time and effort towards this end, perhaps petitioning their federal representatives instead of continuing their pursuit of a park on the Library Lot.