The Regional Transit Authority (“RTA”) has been in the news for all the wrong reasons recently with politics as usual getting in the way of regional cooperation.  Essentially the counties of Oakland and Macomb are arguing they’re not getting enough service for their tax dollars and it feels like the old city versus the suburbs battle that has held back the Metro area for a generation at least.  Washtenaw County actually sees the least in terms of new service as Ann Arbor is somewhat removed from Metro Detroit and already has a robust transit system (in fairness, it will also be paying the least) .  That said, I support the RTA’s plan, it’s important for the region and connectivity to our major city is fundamentally crucial.  However, the planned connection via commuter rail has one critical flaw: the final destination is in New Center, some 3 miles north of where it should be in downtown Detroit.

Although Ann Arbor exists in its own little ecosystem, it actually benefits significantly from proximity to Detroit and the amenities and infrastructure that comes along with a major market.  A generation of Southeast Michigan residents, including many Ann Arborites, turned their back on Detroit seeing the relationship as a detriment as the city declined.  The winds of fate have changed and national movement back to urban areas is not lost on Metro Detroit as a whole swath of young suburbanites are discovering the city for the first time and apartments and offices cannot seemingly be built or renovated fast enough to fill the demand as people gravitate towards downtown.  In turn, many people are starting to see that what’s good for Detroit is good for the region and the state as a whole, and regional cooperation is finally taking hold.

One big step in that direction is the creation of the Regional Transit Authority of Southeast Michigan which began operation in 2013 as a joint effort between the counties of Wayne, Oakland, Macomb and Washtenaw to coordinate regional public transit.  The RTA released its $4.6 billion master plan in May of 2016 with plans to put the measure on the November ballot for voters to approve a funding millage (although that timeline is now in serious jeopardy).  Because the area is so far behind in terms of transit and regional cooperation in general, the plan is vast, spanning 20 years and hundreds of miles of new or improved service.  Requiring support from a wide range of people and geographies means it includes something for almost everyone; rapid transit bus, commuter rail, street car, local bus service, etc.  Ann Arbor is already blessed with a strong public transit system, the AAATA, so it will see some improvements but less of a complete transformation than some communities.  The main components include express bus service to Plymouth and the airport, a bus rapid transit line down Washtenaw between downtown Ann Arbor and Ypsilanti, and commuter rail service to Detroit. 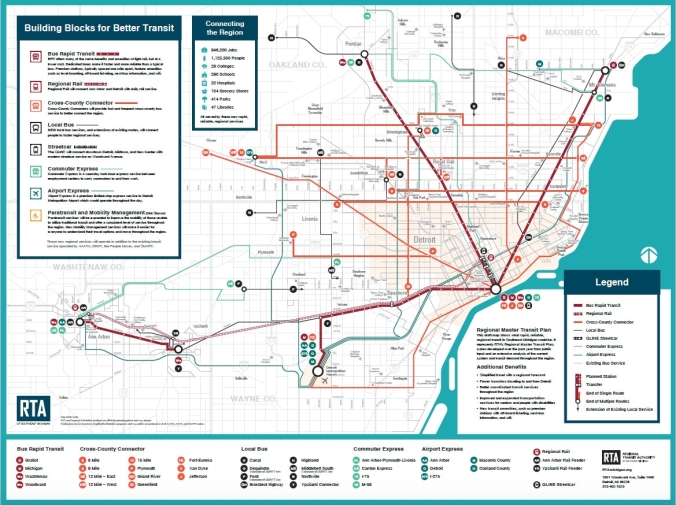 Ann Arbor has always been intrinsically linked to Detroit, the university was first founded there in 1817 before moving out to the country in 1837.  The Michigan Central Railroad opened the first rail line connecting the two cities just a couple years later in 1839.  For 145 years trains regularly ferried passengers between the two cities, primarily operated by Penn Central and later by Amtrak on the Michigan Executive line.  The service was terminated in 1984 due to declining ridership, aging rolling stock and the State of Michigan’s decision to withdraw its support.  The prospect of resuming this vital link is exciting but the RTA’s routing plan may prevent the service from being successful. 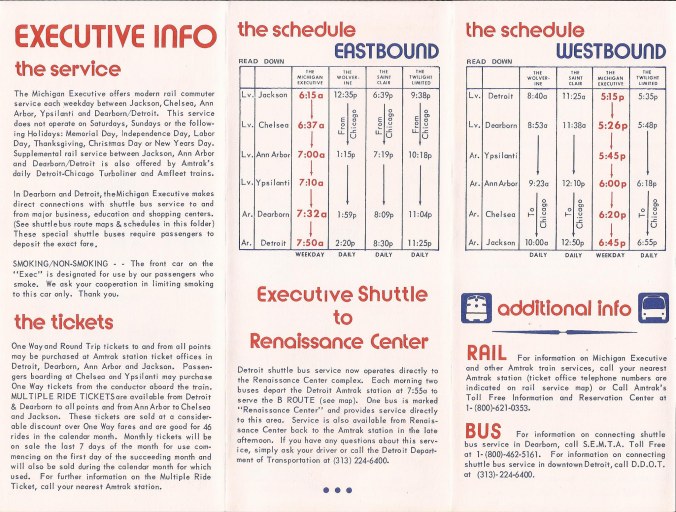 The current RTA plan for commuter rail service relies on the existing rail line currently used by Amtrak running from the Depot Street station just north of downtown Ann Arbor to the New Center station at Woodward and Baltimore in Detroit.  The biggest issue arises right off the bat, the line carries passengers to New Center, a neighborhood some 3 miles north of downtown Detroit.  While the station will be linked to the CBD by the soon to be opened QLine streetcar on Woodward, that adds a connection and a 15+ minute commute to most jobs and points of interest.  New Center is a relatively strong neighborhood (and improving) with immediate access to Wayne State University and the Henry Ford Hospital.  The iconic Fisher Building is there as well as Cadillac Place, a massive landmark office building home to the State of Michigan offices.  There are certainly some jobs and noteworthy cultural icons in walking distance but they pale in comparison to the downtown area.

As the service is primarily targeted at people heading into the city for work, I tried to take a quick look at commuter data from Washtenaw County to Detroit using the U.S. Census data from their 2006-2010 CTPP package but the numbers weren’t great.  The data is old, really before the development of downtown Detroit took off, and the margin of error is high.  For example, there have been over 16,000 jobs added to greater downtown area since 2011, most of them in the CBD.  For what it’s worth, 5-10 years ago over twice as many commuters from the Ann Arbor area reported working in census tracts in the downtown area versus the New Center area.   For a more current but less scientific approach I also looked at local commuter van pooling services and their destinations.  Using vRide to find available routes I noted 2 potential routes to New Center and 26 to Downtown.

The work-related commuter data is compelling and that’s to say nothing of the cultural points of interest.  While there are many institutions in Midtown as well, the CBD is home to three major sports teams, several world class theaters and countless restaurants and bars.  Suffice to say, more people are visiting downtown Detroit than any other neighborhood and it’s not close.  And while the connection to the Qline is a positive, asking riders to complete another transfer while also making the travel time less competitive with driving is a serious detriment.  It’s clear to me that the rail line needs to eventually run downtown.  It also needs to run frequently and continue into the evening and on weekends to service pleasure seekers as well as worker bees.

For the first phase, the current routing makes sense.  Most of the infrastructure is in place and commuter service could be up and running in a shorter period of time with less cost to the taxpayers.  Long term, routing to downtown needs to be explored and I’ll throw out one suggestion.  The easiest right-of-way from the west into downtown is probably Michigan Avenue.  Seven lanes across at some points, there is excess capacity for vehicle traffic that could be taken up by railroad tracks. 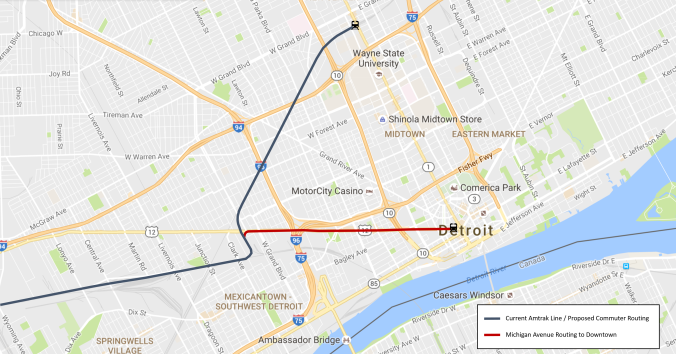 I’m suggesting the trains take the established Amtrak route, hopping down onto Michigan Avenue where the two meet between Scotten and Hubbard and then continuing in dedicated lanes to downtown.  This potentially gets in the way of the RTA’s plan for Bus Rapid Transit (“BRT”) in this corridor but I believe the two could work in tandem.  Additionally, the tracks could be used for an extension of the QLine down Michigan, it’s 2.7 miles to Campus Martius Park where it could meet that line, very similar to the 3.1 mile Woodward stretch.  In the short term the commuter line could end with a basic station on Michigan in between the Rosa Parks Transist Center and Campus Martius, perfect for making bus connections, hopping on the People Mover or picking up the QLine to go to Midtown or New Center.

I’m picturing something like Austin’s MetroRail which enters downtown at grade in the street and terminates in a very basic platform station.  It’s not ideal but the location is more important.

Obviously this is a very rough plan but a significant improvement over the planned service.  Although it’s a mundane, fact-of-life type of service in many metro areas, the prospect of being able to take a low stress and efficient train ride into downtown for work or for play is pretty exciting here in Southeast Michigan.  Let’s hope the RTA Master Plan continues to evolve and that the powers that be see the light in working on a route to downtown Detroit from Ann Arbor.