The controversial downtown real estate topic du jour is currently what to do with the so-called “Y Lot”, the vacant former YMCA parcel on William Street adjacent to Blake Transit Center. The situation has been covered ad nauseam by Ryan Stanton at the Ann Arbor News and there’s come great historical context available at the old Chronicle website. I’ll try to sum up where we’re at as succinctly as possible.

The Y Lot, approximately 0.8 acres on William between Fourth & Fifth.

They city bought the Y Lot back in 2003, tore down the old YMCA after it moved to Washington Street, and then very nearly pulled off a sale that would have created a new development with apartments and potentially a hotel on the upper floors with retail and a transit center on the ground floor. That deal fell apart in 2007 resulting in a lawsuit the city eventually won, the new Blake Transit Center was rebuilt mid-block, and the lot was again put up for sale in 2013. The city sold the site to Dennis Dahlmann for $5.25 million in 2014 with an agreement that stipulated a mixed-use development with a series of restrictions be built within four years. If no such project was built (as has been the case) the city had the right to buy the property back for $4.2 million.  That right kicked in on April 2nd, 2018 so the city council now must decide whether or not to negotiate with Dahlmann or exercise that right.

Development proposed by Dahlmann/The Habit Co. in 2016 for the site.

So what should the city do?

First off, what’s the lot worth? I don’t think there’s any question it’s worth more than $4.2 million. There’s a couple of different appraisals out there, the one hired by Dahlmann says $6.1 million is most likely, the one hired by the city quotes values from $7.7 million to $12.5 million depending on the size of building that can be built. I pulled my own data (Google Sheet) to show pretty clearly that redevelopment properties with D1 zoning have been typically going for $275-$300 per square foot. Without restrictions, the site could easily be worth $9.5 million to $10.5 million.

At first glance, it’s a no brainer for the city to buy it back, decide what they would like to see and sell it to a developer for a significant profit. Dahlmann signed an agreement, didn’t hold up his end of the deal – as many it seems, expected – and now has to face the consequences. Unfortunately it’s not that simple. Dahlmann has sued the city, citing a bad agreement and the city not holding up their side of the deal, notably as it relates to an underground connection to the Library Lane garage that doesn’t actually exist. He’s offered $1.5 million to settle that lawsuit, remove all restrictions and own the land free and clear.

There are a few reasons the city may want to consider a deal with Dahlmann.  These are big time “ifs” but I’ll lay it out there. I believe the city is in a good position to win a legal battle with Dahlmann but there’s almost no question they have a little exposure, the agreement was somewhat ambiguous and this could get dragged out for years. The other “if” is does Dahlmann actually intend to build this project if a deal is made? I’m told he cares about this community and his legacy and he has the wherewithal to pull it off, his track record thus far says otherwise. The final question is whether or not that $1.5 million offer has room. Let’s be conservative and say the lot is worth $8 million without restrictions, there’s a case to be made that a settlement figure here should be $3 million or more.

Here’s why I think the city should at least consider a deal. Even if the property is worth $9 million or more, we’re at the long end of the investment cycle here, there’s a chance that value comes down in the next couple of years. It’s likely that the litigation will tie up the site for at least a couple of years so you’re in an uncertain position in say, 2020 or 2021. Furthermore, if Dahlmann will really build the project, you could be looking at $1 million plus in tax revenue coming in by 2021. The alternative is another project that’s likely 2-3 years behind. The profit the city is counting on can be made up in just a couple years if the development happens. Lastly, and this is not a knock on our administration, it’s more just the way government works, but the city is terrible at selling and/or developing real estate.  Cases in point, the Library Lot and this very site which is some 15 years into a rocky unproductive process.

So, if council believes Dahlmann will build the project, feels there may be some legal exposure if they don’t negotiate, and can deliver a better settlement number while keeping some restrictions in place (let’s say an affordable component and a 3-4 year timeline), it might be time to make a deal.

If they have no confidence in Dahlmann, feel good about their legal position, and cannot do better than $1.5 million, it’s time to buy it back. With good leadership and a settlement of the lawsuit, the city can make money for other services and potentially deliver a worthy project for downtown.

Lastly, it’s important to note that Mayor Taylor and council member Ackermann came out with a new affordable housing vision for the Y Lot over the weekend. It’s a commendable plan and I’ve long said that one of the only ways to really put a dent in the affordable housing commitment is to use public land with an affordable developer partner, but I fear this particular site is too messy to bring this into the fray in the 11th hour. It also completely changes the economics of the deal as discussed above. I might recommend they consider applying this exact same strategy to another city parcel, the Kline Lot for example, which is less entangled?

There is a special city council meeting to decide the fate of the Y Lot this evening, April 23rd. I think there is a case to be made for either side and I urge all our council members to carefully weigh all options.

This development was announced back in 2014 but I’m happy to report we should start seeing visible signs of progress any day now.  Located at 210-216 S. 4th Ave in what has most recently been known as the Town Center Plaza, owners David Ebner and Joe Barbat of Barbat Holdings, LLC are planning 33 condominiums in a completely renovated and expanded building coined Montgomery Houze. 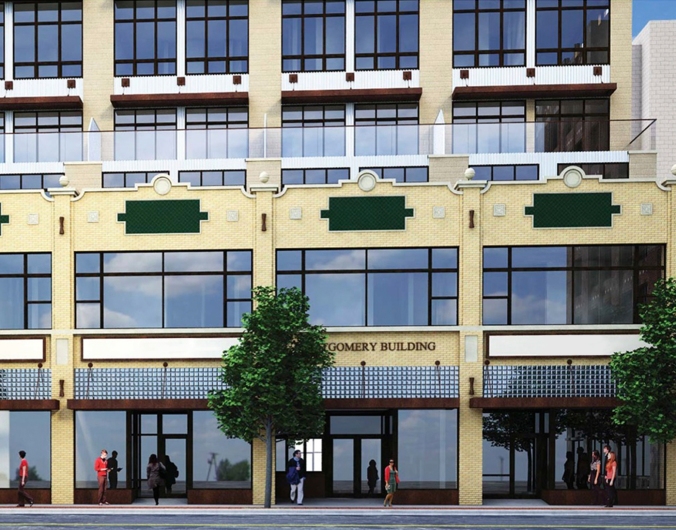 This is one of those developments that it’s hard to find too much fault in.  The building was long ago the victim of a bad corrugated metal facade and the new renderings show a masonry exterior much more reminiscent of the original building, once home to Montgomery Ward’s.

The original Montgomery Ward & Co circa 1925.  The building was later expanded with another bay to the south where Bandito’s is now.

The Ann Arbor Comedy Showcase leases the basement space in the building and Bandito’s Mexican Restaurant will remain.  There will be 2-3 new retail spaces.  The condos range in size from Studios to 3 Bedrooms and there is no on-site parking.

I’m told interior work is currently ongoing and exterior work should begin soon.  The building was originally planned to be apartments or a mix of condos and apartments but the hot sales of condos in projects like The Mark, 121 Kingsley West and 414 N Main convinced the developers to pursue an all condominium strategy.

Barbat has been busy opening a couple other “Houze” developments in Detroit, the Regis Houze and the new Briggs Houze.  From what I can tell these projects appears to be excellent adaptive reuses of historic buildings, I wish them the best of luck both in Detroit and here in Ann Arbor.  As a bonus, local architect Brad Moore is behind the design at Montgomery.

I personally think 4th Avenue has a ton of potential and this project is an excellent step in the right direction.  Formerly a red light district of sorts, 4th offers less expensive retail rents as compared to Main Street or even Liberty but has great character and some unique local businesses.  If Habitat builds on the old Y lot and the city goes through with a plan to put a retail business incubator in the ground floor the 4th and William Garage, we’ll only see greater things coming to this street.