Back in November the proposed funding for the Regional Transit Authority Master plan failed at the ballot box dashing the hopes of transit proponents and supporters of regionalism across Southeast Michigan.  While certainly a setback, it provides an opportunity for the RTA to step back, reassess and tweak the plan and marketing for another vote in 2018.  Below are a few suggestions and considerations for the next go round.

First of all, planning an entire mass transit system essentially from scratch for a region containing some 5 million people across 4 counties is a massive undertaking.  The RTA staff and their consultants did an admirable job but there’s always room for improvement.

The current plan relies on Bus Rapid Transit (“BRT”) in the primary corridors, namely Woodward, Gratiot and Michigan Avenue.  At first glance it makes a lot of sense.  BRT is cheaper and more flexible and those roads are massive, 100-120 feet wide through much of the city, up to 200 feet of ROW further from the city center and in the suburbs.  However, these are long corridors, Pontiac to Detroit is some 30 miles making this one of the longest BRT lines in the US.  There’s over 25 intermediate station stops.  Projected travel time is 70 to 80 minutes.  That’s an untenable commute for your average suburbanite with a choice.  BRT is primarily a substitute for light, city rail, think the Chicago L or the New York City Subway.  Those systems work mainly within the city itself, extending out to a few inner ring, city-adjacent suburbs.  To go further out you need to take a regional train, something faster with fewer stops.

There’s a lot of rail infrastructure in place already with clear rights of way in and out of downtown Detroit from a time when the area actually had a commuter rail network.  The trip from Pontiac took 60 minutes on the train (or 41 minutes express) over 50 years ago.  There’s rail going north to Pontiac, east to Mt Clemens and Port Huron, west to Ann Arbor and Plymouth and south to Toledo.  The RTA is only planning on the Ann Arbor service and I think that’s very disappointing.  A relatively high speed train from Troy to downtown Detroit in say 30 minutes or so (essentially possible in the 1940’s so hopefully manageable now) is a truly compelling commute option for your average worker or Tigers game attendee.  Twenty stops on the bus?  Not so much.  I would want to see the other radial routes as well but the Woodward main line makes all kind of sense to start with.  Lastly, and I’ve discussed this previously on this blog, the lines need to go into downtown.  A train to New Center is all but worthless and you’re not going to get travelers that have a choice.  I would love to take the train from Ann Arbor but I’m not going to drive, bus or Uber to the station here, hop the train for an hour and then take a 20 minute Qline ride on the back end to work or play.  That’s just not realistic.

Prepare for and Embrace New Technologies

I hear from transit detractors all the time that autonomous cars and other emerging technologies are going to eliminate the need for public transit.  That’s not true at all but it’s an objection that needs to be met head on and there are potentially some ways to utilize more tech going forward in the plan.  This is a plan where much of the infrastructure is 10 or more years away yet the tech isn’t all that strong by today’s standards.  Essentially buses with drivers, GPS tracking and signage and shared ticketing with a smartphone app, etc.  Basic things that most major cities have had for years.

This is the home of the auto industry and hopefully home to the future of autonomous vehicles.  Think to the future, think bigger.  Work with Ford’s Chariot service, plan for autonomous vehicles, cars, buses, trains.  Partner with the GM-backed Lyft service for first and last mile connections.  You want votes, aspire and inspire.

Not everyone is going to use public transit especially in the cradle of the automobile.  If you want to get voters on board in places like Macomb County you’re going to have to convince them there’s something in it for them.  With two years to educate folks, focus on what’s important to them.  It’s been well documented that proximity to transit boosts property values and while that was certainly a bullet point in the plan, perhaps it needs to be more of a focus.  Use studies, show heat maps to give people actual potential numbers to consider.  This goes back to my previous point about rail though, the impact of fixed rail transit on property values is much clearer than that of BRT.

This idea is a little more out there and I don’t even know if it’s legal.  The RTA was asking for 1.2 mills from every property owner in the four county region.  I get the argument for regionalism and a working public transit system is good for everyone but it’s still really hard to convince someone living in rural Washtenaw County of the benefits of this system to them.  They’ll see little to none of the property value increases I mentioned above and they’re very unlikely users.  How about a millage that’s tiered based on proximity to service?  A little complicated to be sure and I have no idea if the math works, but something like 0.5 mills withing a mile of a regular bus route.  1.0 mills within a mile of a rapid bus or train line.  2.0 mills within a half mile of a rapid bus or train line.  If you’re more than a mile from any service you pay nothing. 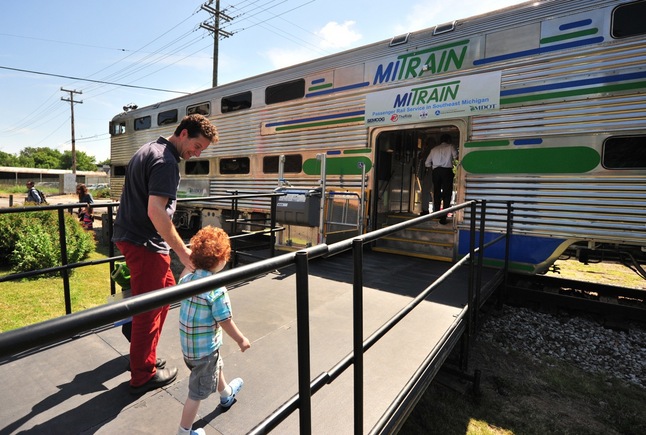 The backbone of the RTA’s plan is solid and I think fundamentally a BRT-based system is a good place to start.  High speed rail in and out of DOWNTOWN I think is an absolutely necessary part of the service as is increased technology and autonomous vehicle elements.  The rest is just marketing.  The RTA has two years to make changes and improve their outreach and education, this blogger wishes them the best of luck.

Beautiful snowy night downtown!
Hard to see now save that great tiled roof but the new @detroitstreetfillingstation used to be a gas station owned by the Ann Arbor Cooperative Society, circa 1930's
New post up on the blog: The Truth about Student Housing in Ann Arbor, link in bio, check it!