A 12 story, 124 unit apartment tower will be coming soon to the parking lot between the newly renovated Graduate Hotel and the Sloan Plaza Condominiums. 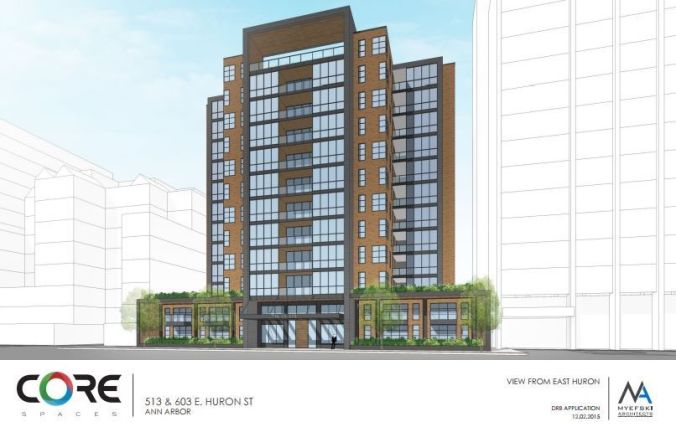 The project is being developed by Core Spaces, the team behind the winning Collective on 5th proposal for the Library Lot.  Unlike the highly controversial Foundry Lofts development just down the street at the corner of Huron and Division, The Calvin practically sailed through the site plan approval process.  Both the city and project neighbors praised the developers for their outreach and willingness to work with nearby property owners and residents.  Although the building maxes out the 120 foot height limit, the total square footage of 132,939 represents a floor area ratio (FAR) of just 515%, well below the 700% maximum allowed with premiums.

As such, The Calvin received a clear stamp of approval from the planning commission in a 6-0 vote and went on to unanimous approval from city council.  If that’s not shocking enough, not a single Ann Arborite spoke out against the plan at the council meeting, instead a smattering of praise was heaped on the development team.  President of the Old Fourth Ward Association, a vehement and outspoken opponent of the Foundry Lofts had this to say: “I have been in on many, many, many development meetings with developers and never before have I dealt with a group of people where they sought us out and they sought to build not only a handsome building, but a building that would not negatively impact the neighbors. This is a rarity.”

Of course it helps that the project is on a block of Huron that features four high rise structures and is sandwiched in between two on an underutilized parking lot.  It’s a large and somewhat oddly shaped parcel that naturally provides a fair amount of setback between the building and neighboring houses to the rear. 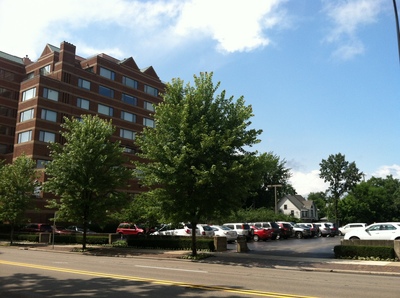 In short, there’s not a whole lot to complain about aside from the usual gripes about parking.  There will be 108 parking spaces and 54 bike spaces.  Given the walkability of the location and access to public transit, this should be more than sufficient  (remember folks, building more parking encourages automobile use, bad for the roads, bad for the environment and requires more parking elsewhere).  I wouldn’t have minded seeing some retail here but it’s a tough location for it so I can live without here.

The property will be marketed towards students as well as young professionals and other market rate tenants with rents ranging from $999 to $5,200 per unit.

Much like the planning commission and city council, I don’t have much else to say.  Looks good, fills a gap wasted by a parking lot and provides more housing which can only help to bring more energy and vitality to the area.  Best of luck guys.

Disclosure: I know most of the folks over at Core personally.  I’ve tried to be non-biased here, it really is hard to find too much fault with the proposal.

Beautiful snowy night downtown!
Hard to see now save that great tiled roof but the new @detroitstreetfillingstation used to be a gas station owned by the Ann Arbor Cooperative Society, circa 1930's
New post up on the blog: The Truth about Student Housing in Ann Arbor, link in bio, check it!