There are some major changes afoot on South University.  It’s been long rumored that Ron Hughes of Bingham Farms-based Hughes Properties is working with the Ulrich family to redevelop their significant holdings in the area.  Hughes is responsible for some pretty serious commercial projects in town including the former Borders redevelopment on Liberty and the ground floor retail component of the Landmark high rise at South University and South Forest.  The DDA is also in the planning stages of some much needed street and sidewalk improvements for the area including removal of the massive round planters, crossing improvements to the South Forest-South U intersection and increased space for outdoor seating.

Adding to this change could be a smaller commercial building filling the only structure-less void on this stretch.  Back in 2009, arsonists burned down the former Pinball Pete’s, at the time vacant and boarded up as Pete’s had moved across the street some years before.  The Tice family, owners of the Pizza House restaurant, had owned the property for many years.  It appears they had explored several options for the site, including experimenting with a food truck court in 2013, but had never committed to a long term redevelopment plan. 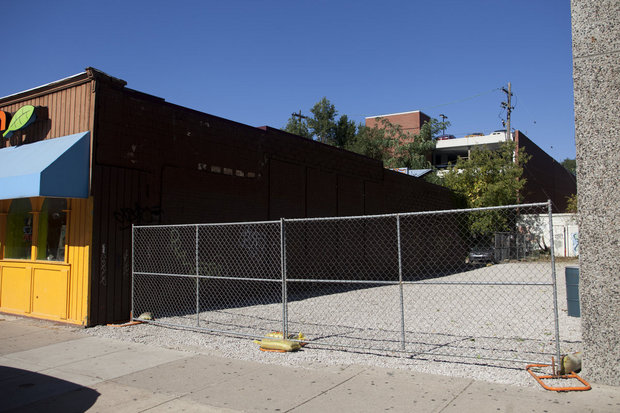 In December of 2015, they sold the property to Boston-based Suburban Campus Properties, owners of the adjacent University Towers (SCP also owns the commercial component of the Michigan Theater Building), for $1,050,000.  This makes sense simply as a buffer against future high rise development next to the Towers but SCP does not appear to be sitting on their hands, they recently listed a potential new retail/office development for lease.

The listing shows they’re planning a two story building with up to 12,000 square feet of space available on both floors.  It’s important to note that this is just a conceptual plan, the design and size of the building will be dictated by the tenant or tenants they attract to the space, however it gives you an idea of what the owners are anticipating.  They’re asking $45 per square foot, a hefty price tag and one that can likely only be taken on by a national retailer looking to plant a flag here in Ann Arbor.  New construction with high ceilings and modern amenities in the heart of the campus area is a rare find and I would expect there to be considerable interest from the market.  For reference, the Landmark retail space was asking $45 per square foot as well, 7-11 pays nearly that for 2,500 square feet.  Walgreens pays just over $40 per square foot for nearly 18,000 square feet of older but completely renovated space with high ceilings at State and North U.

Like most locals, I hate seeing the proliferation of national chains in the downtown area although I do understand that a mix of local, regional and national businesses is healthy.  This building would replace a vacant gravel lot in an in-fill location and that is certainly a good thing.  Normally I would say there is plenty of older, cheaper space on South U for local businesses to establish themselves but I don’t know what the future will bring to this stretch, some of those buildings may face the wrecking ball.  Here’s hoping they find a quality tenant that fits in well with the overall character of the area and build a high caliber design.  I know the family behind SCP just enough to know they care about more than just the bottom line and I believe they will be selective and measured in their decisions going forward on this project.

My first thought when I saw this project was the possibility of a Nike Store to go along with the new Nike apparel contract at UM.  I just read a story about Under Armour opening a 15,000 square foot flagship store in Madison, WI following up on their recent contract with UW.  Would the townies want that?  Definitely not.  Would your average 19 year old be thrilled?  Probably.

For the record, I think South U needs some redevelopment.  There are a number of buildings that would break my heart to lose but there’s some brutally designed, poorly maintained 1950’s-1980’s structures that are in need of a major reboot or potential replacement.  I’m a huge proponent of character but significant swathes of South U are tired bordering on moribund right now.

When poking around for this story, I noticed that 1121 S University, the building at the NW corner of South U and Church with TCF Bank on the ground floor, sold last year to University of Michigan Credit Union.  UM ended their partnership with TCF last year in favor of PNC.  I would not be surprised to see TCF exit this location whenever their lease is up and see a new UM Credit Union branch replace it.  Hard to argue that would be anything but positive, the building needs some work and you’re replacing an out of state bank with a local one.  Hope I’m right.

One thought on “New Retail Project Coming to South U?”